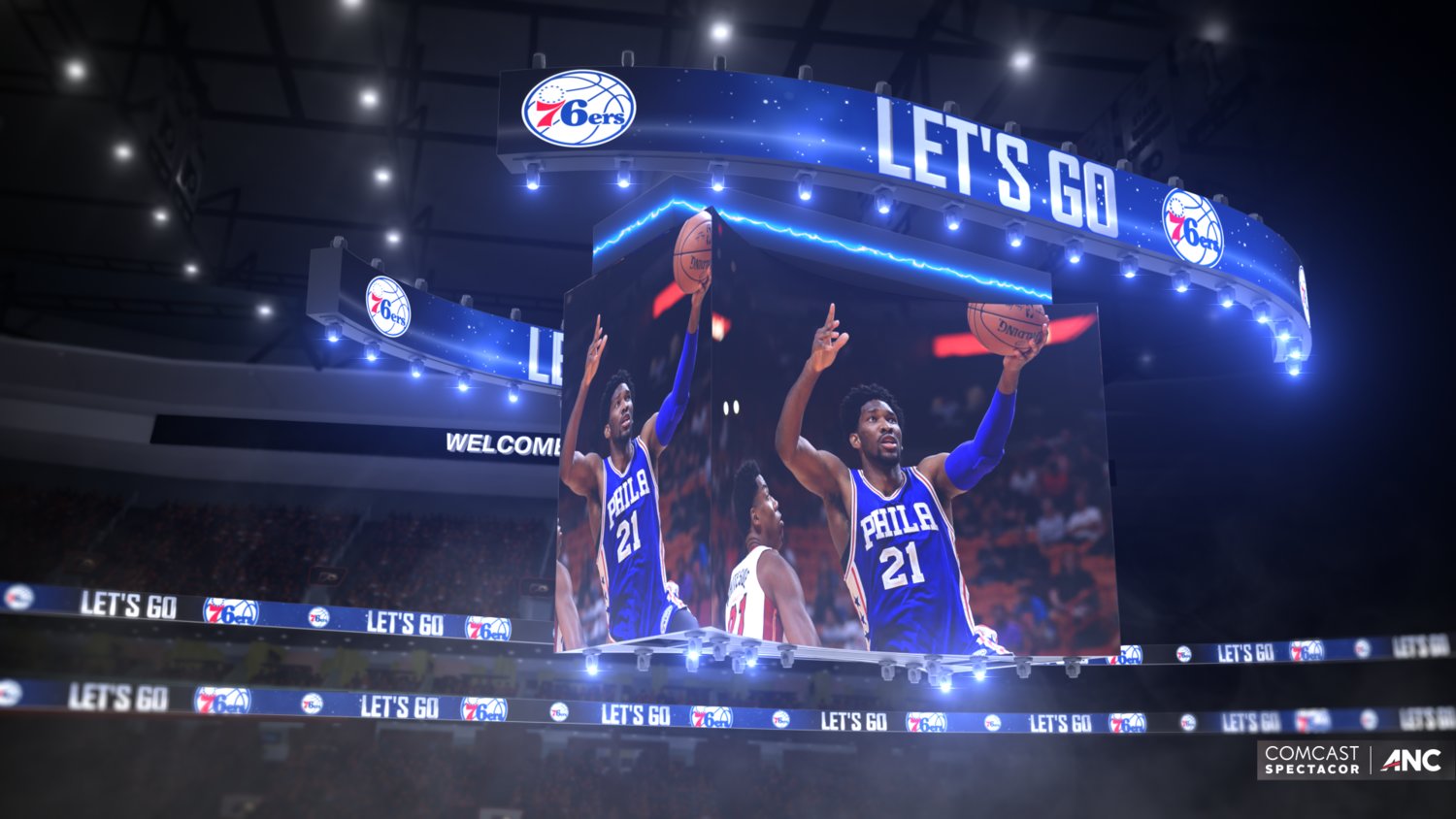 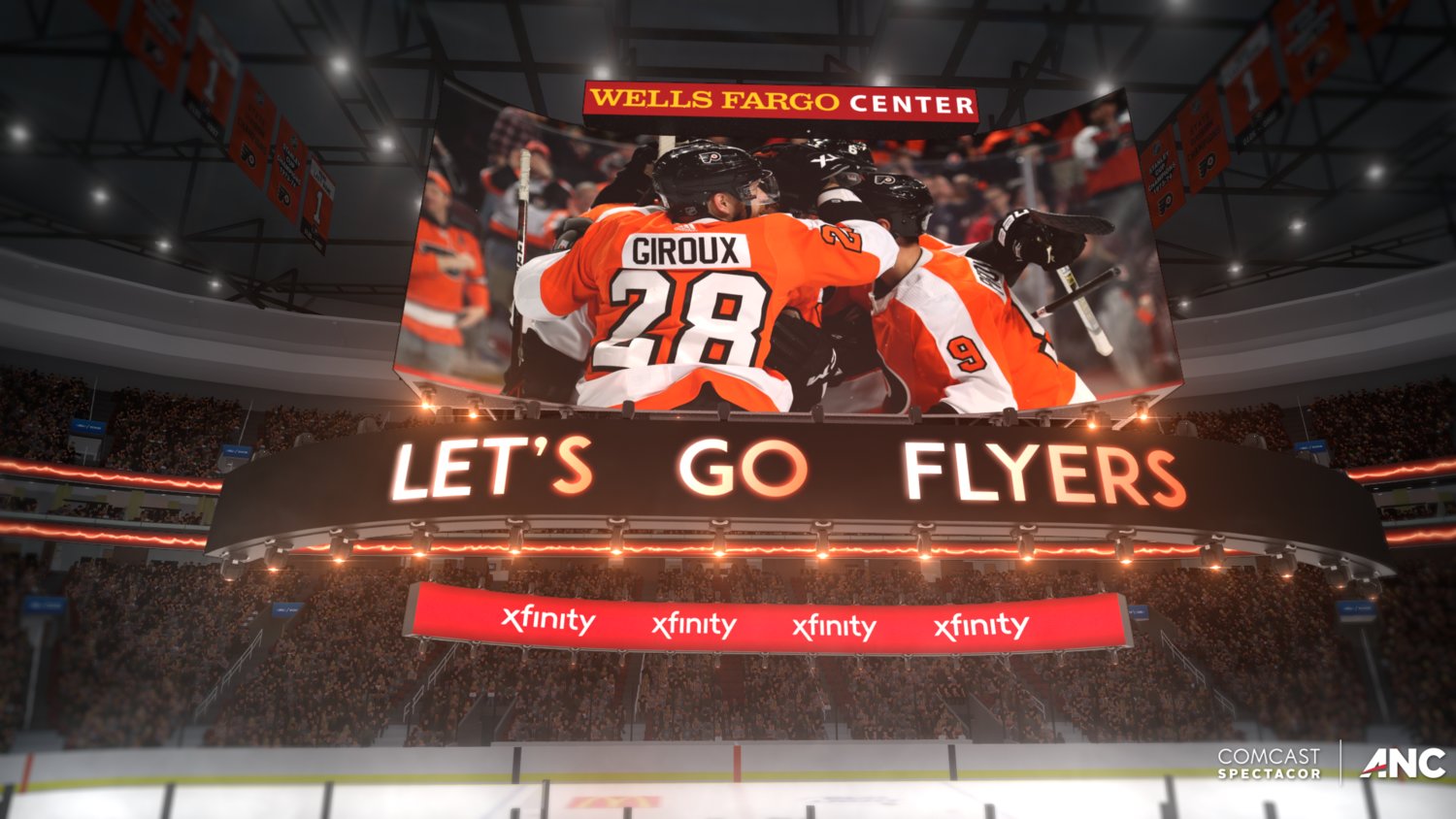 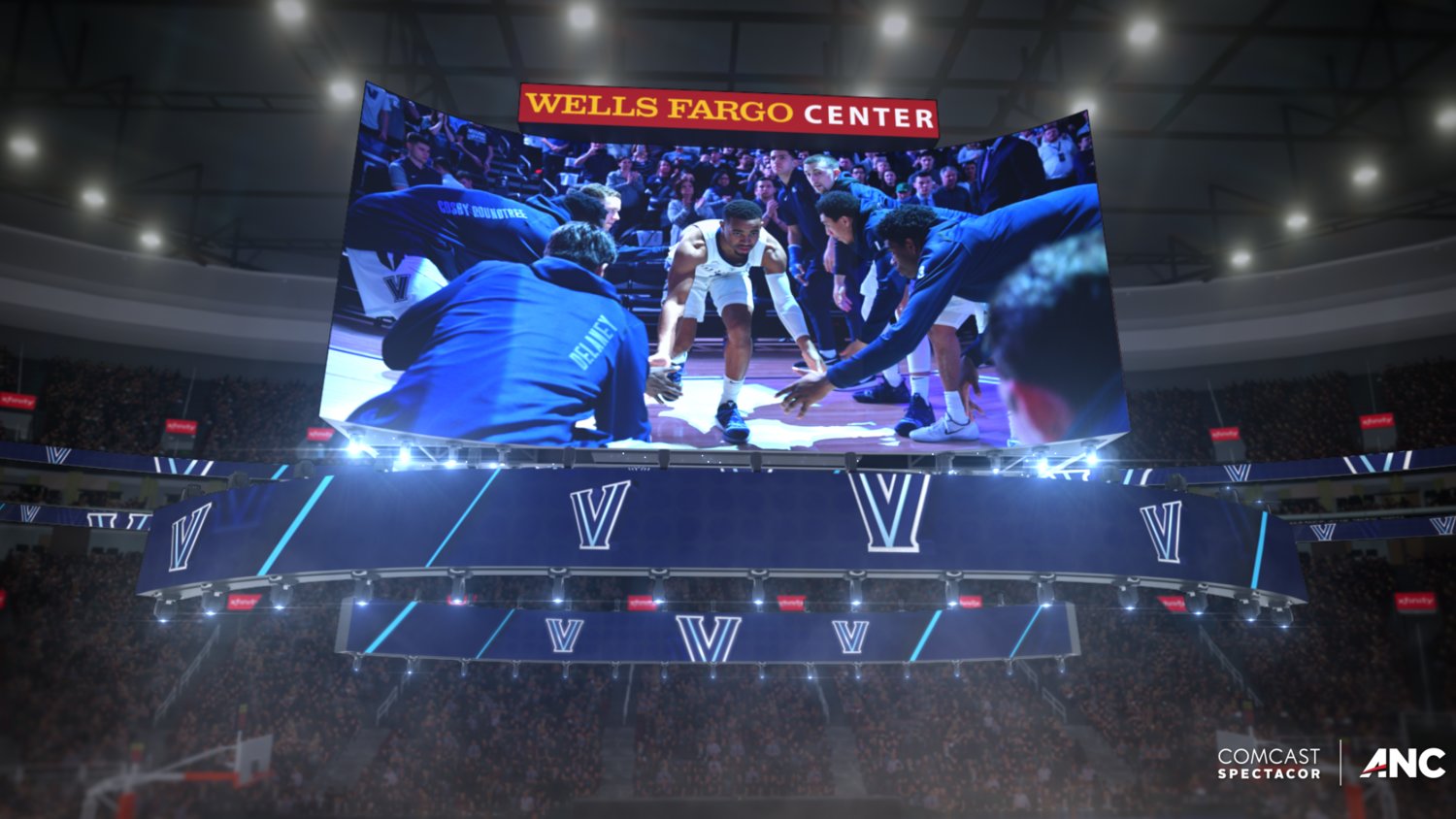 Philadelphia’s vibrant sports culture is about to receive yet another influx of excitement. When the Flyers and 76ers begin play next season at the Wells Fargo Center, they will be competing under the glow of the most technologically advanced arena scoreboard in the world. Comcast Spectacor and ANC announced today that the first-ever US Patented Multi-Directional Kinetic 4K center-hung entertainment system is in development and will be installed in time for the 2019-2020 season.

The new Kinetic 4K system features 65% more LED screen real estate than the Wells Fargo Center’s current center-hung model and features an unprecedented ability to transform and be configured in a variety of formats to best highlight the action below. Complementing the center-hung display are two massive crown trusses designed to create a captivating experience with multi-directional movement. Never before has an arena scoreboard had the ability to extend and compress 4mm LED technology in such an adaptive manner. (U.S. Patent No. D928,876: Multi-Directional Display)

“Comcast Spectacor is proud to highlight the next phase of the Wells Fargo Center’s ‘Transformation 2020’ initiative with the first Kinetic 4K center-hung ever to be installed in a professional sports venue,”

said Valerie Camillo, President of Business Operations, Philadelphia Flyers and Wells Fargo Center. “Together with technology partners like ANC and Comcast, the Wells Fargo Center continues to innovate and further our commitment to be the most technologically advanced arena in the world.”

When fully expanded, the Kinetic 4K system, combined with the crown trusses, will feature the most square feet of center-hung 4mm LED video technology in an arena that hosts both NBA and NHL games. While compressed, the configuration embodies a more traditional equilateral display that provides the Wells Fargo Center with an ability to tailor- fit itspresentation. All together, the Wells Fargo Center’s new center-hung system features a grand total of more than 6,600 square feet of 4mm LED video technology.

“With revolutionary Kinetic 4K technology, this new center-hung entertainment system will usher in a new era for how venue technology will be designed in the future,” said Jerry Cifarelli, Founder and Vice Chairman, ANC. “ANC is proud to partner with Comcast Spectacor and TAIT on this iconic project and we look forward to future collaborations.”

The new in-arena entertainment system is a headliner within the next phase of the Wells Fargo Center’s multi-year “Transformation 2020” initiative, a $250 million multi-yeartransformation of the arena that began in 2017. The next chapter of advancements embody the largest investment in the arena to date and will provide significant upgrades to multiple levels of the venue. Details will be announced over the coming weeks.

“It is an honor to have our team be part of this innovative undertaking that delivers a stunning visual spectacular,” said James “Winky” Fairorth, President and CEO, TAIT. “This technological advancement will have a major impact on the game experience.“

The Kinetic 4K system has two primary configurations. The extended view deploys a mechanism that expands its vast concave sideline screens, each measuring 28’ H x 62’ W. The two end-line screens measure 28’ H x 22’ W, while the two double-sided crown trusses hang separately, with the ability to move above or below the main displays, each measuring 5’ H x 67’ W.

In the collapsed format, the center-hung system remains fully functional, yet condenses in size and is capable of being lifted and stored within the roof truss system. In this configuration, the sideline screens measure 28’ H x 30’ W. In addition to the crown truss spectaculars, a more traditional four-sided LED ribbon sits on top of the center-hung, measuring approximately 3’ high, which matches the lengths of the collapsed view of the display.

Throughout their 16-year partnership, Comcast Spectacor and ANC have partnered on technology integrations throughout the Wells Fargo Center via ANC’s IPTV platform. This includes all of the venue’s LED fascia, two outdoor LED displays, highway facing billboards, team store technology, as well as more than 400 LCD displays and Digital Menus. When the new Kinetic 4K center-hung scoreboard is installed, the complex will feature a grand total of more than 26,400 square feet of LED technology. 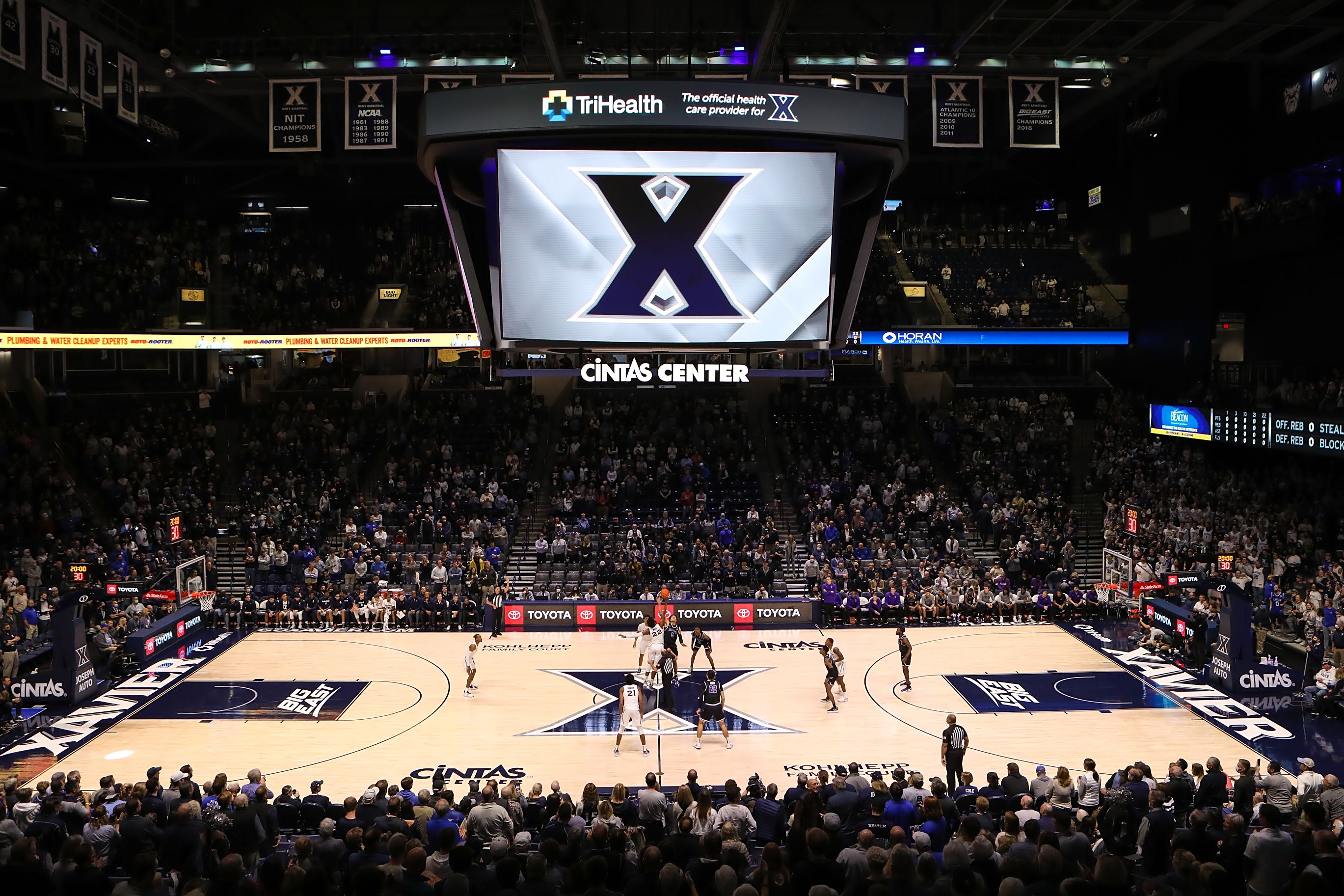