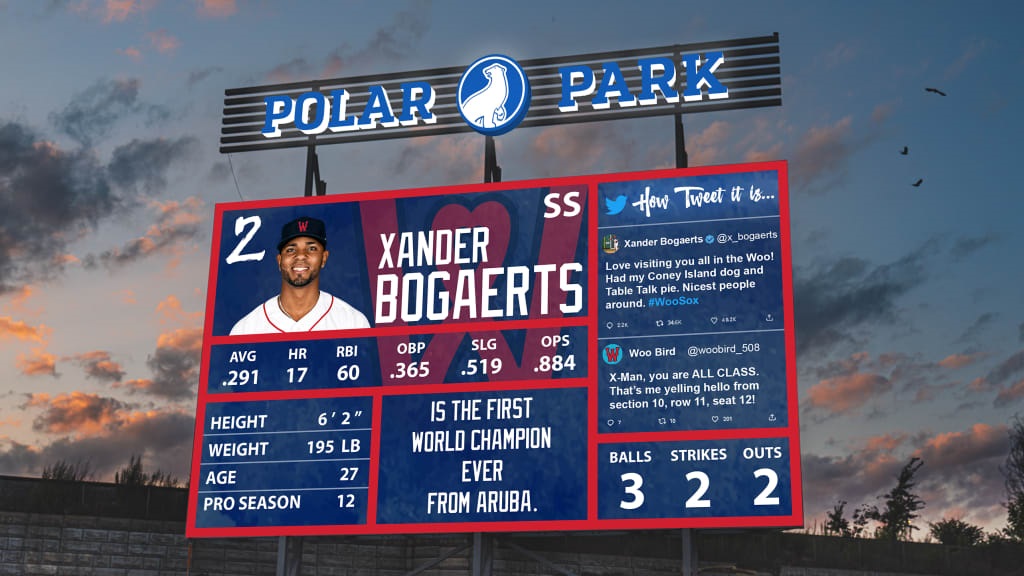 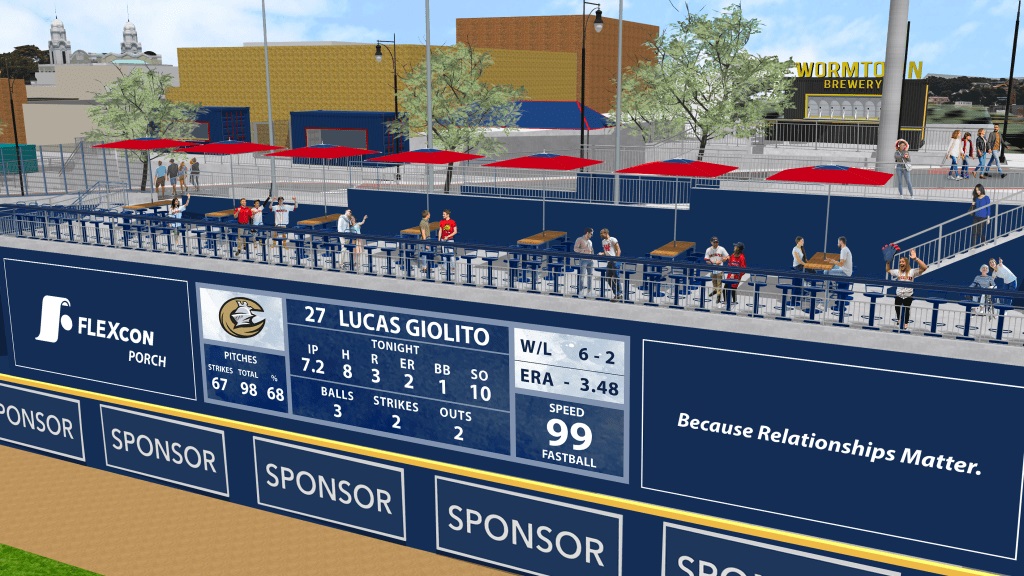 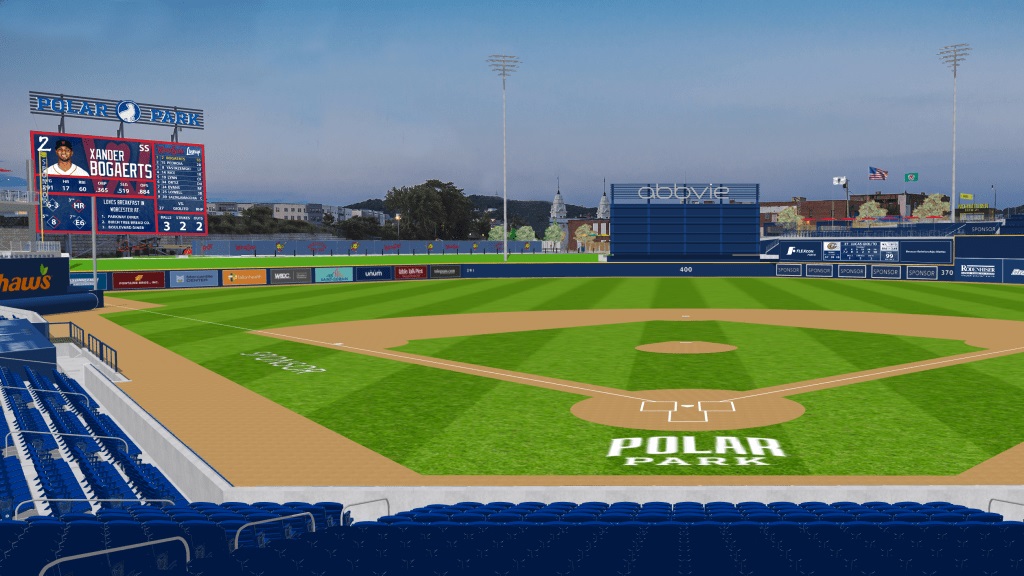 Polar Park will have high-technology, full-color videoboards in Left Field and Right-Center Field, as well as a large, traditional, electronic alphanumeric scoreboard on the Worcester Wall in Right Field, plus a pair of LED Matrix boards behind First and Third Base, all supplied and integrated by experience design and execution company, ANC.

At Polar Park, the Left Field Board will be 40’ H x 70’ W down the left field line and will primarily focus on the hitter and lineups during innings of Worcester Red Sox games.

The Right-Center Board, on the Flex Con Porch, is 11.5’ H x41’ W. During innings it will primarily be a “Pitchers Board,” focusing on the speed of pitch, type of pitch, and pitch count. Between innings it will often be a “Red Sox Board,” providing information about the parent club, including updates on games when played concurrently.

Keeping fans informed about essential game information as they circumnavigate the park, LED Color Matrix Boards behind First Base and Third Base will be 2.5’ H x 60’ W. Each will provide the count, score, inning and more.

In addition to providing statistical information and notes about the players, the videoboards will provide entertainment pregame, postgame, and between innings of WooSox games, as well as during many other events at the year-round venue.  The club is also planning innovative interactive programming that will further connect fans to the players and to each other. The WooSox will use ANC’s proprietary scoring system that is also used throughout Major League Baseball.

“We will use technology to inform, entertain, and involve fans even more in the Polar Park experience,” said Red Sox Hall of Famer Larry Lucchino, Principal Owner and Chairman of the WooSox. “In a city known for its inventions—from modern rocketry to the monkey wrench—we hope to write the next chapter of ballpark presentation.”

Lucchino and WooSox President Dr. Charles Steinberg first introduced a “Pitcher’s Board” to fans of Major League Baseball 25 years ago when they were with the San Diego Padres. In 1995, the Padres were the first to display the speed of each pitch, and in 1996, installed a board that included the speed, the type of pitch, and the pitch count including ball and strike totals. When they joined the Boston Red Sox in 2002, they were among those who overhauled the electronic scoreboard system (including the creation of a Pitcher’s Board)while preserving and enhancing the manually operated iconic scoreboard on the Green Monster.

“Today’s news is yet another milestone on our path to Polar Park,” said City Manager Ed Augustus, Jr. “It reflects our pursuit of a technologically advanced ballpark with an integrated system of five scoreboards, videoboards, and LED matrix boards. This is going to be a great ballpark for baseball fans, and a great venue of which the City of Worcester can be proud.”

The scoreboard affixed to the Worcester Wall is electronic and will be operated in conjunction with the other boards from the Communications Control Room in the DCU Club. Patrons and visitors on Polar Park Tours can see the operation live.

A Red Sox partner since 1999, ANC provided Fenway Park’s modern videoboard system in 2011. The innovative company is known across professional sports for delivering the latest in digital technology to connect fans with the game. In addition to designing and integrating the new display network, ANC will install home plate rotational signage, create in-game display content, and provide game-day technical support.

“The entire Red Sox organization is steeped in history, driven by the best fans in baseball,” said Brad Brockhaug, ANC’s Chief Revenue Officer. “It was our honor to bring our creative energy to Polar Park so a new generation of fans can enjoy the love of the game.”

ANC is part of LearfieldIMG College. 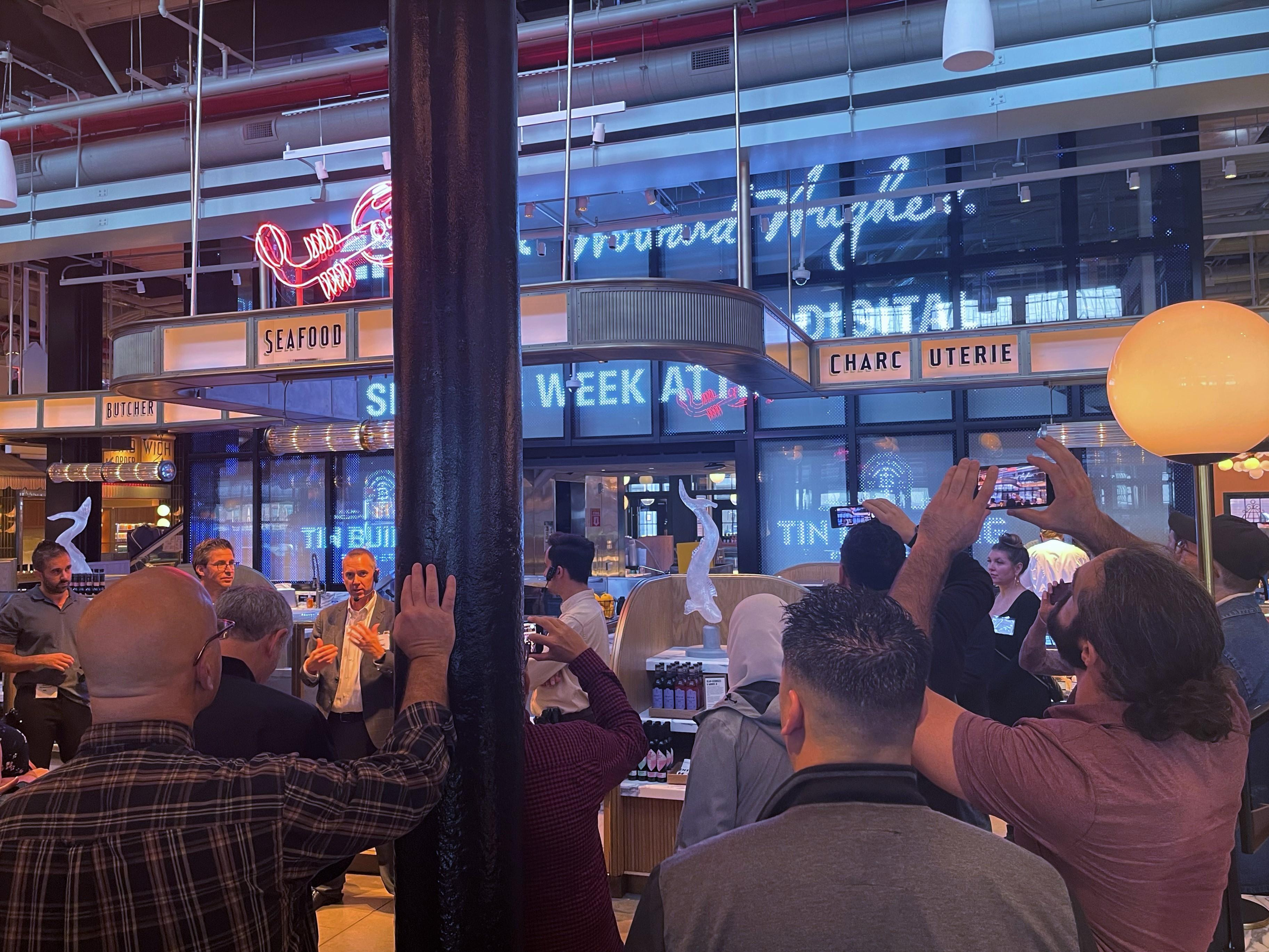